I have a new blog and I'm claying and painting...mostly claying right now!

I found pictures of my goddess beads all over pinterest. There are probably thousands of them. Unfortunately, many of them point to someone else's blog and they misrepresented my work by strongly inferring they could be made with a homemade clay made of baking soda and cornstarch. I made a video upon finding this out.

So I made a tutorial on how to make them from polymer clay, which is what they are.

Videos about problem solving regarding curing the beads and about the beads can be found on my youtube channel:

I don't just make beads' I'm learning how to better sculpt figuratively. That could lead to art dolls, desktop goddess sculptures, and other fun stuff. Here's my work in progress as I follow along with a Creager Studios instructional DVD.

I choose to work with polymer clay because it uses far less energy to cure in an oven than earthen beads do (understatement). I fire my beads for minutes, about 40, at about 266 degrees F. Earthen beads might need 12 to 18 hours at temperatures 10 or more times higher than that. Also, I can work with polymer clay at home and cure it in a home oven. Additionally, the medium is more open to a wider range of sculpting, surface design and many other techniques and can mimic many types of glass, plants, clays, rocks, people, animals and more. 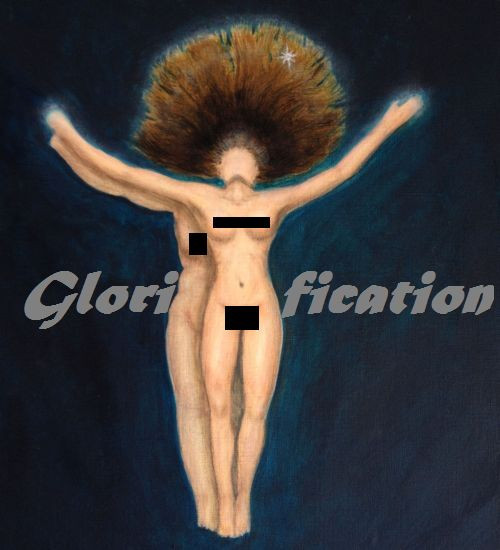 Posted this work in progres also to my flickr. http://www.flickr.com/photos/sari0009/

This is my 3rd completed painting and my first study of skintones. I don't have a model but I did start out with a limited palette of 4 colors (red, white, black, brown, just as they use for "aux quatre crayons" sketching methods) for the figures, to which I added shadows and portrait pink skintone.

Obviously, this is a mental health issue. Mentally well people don't pick up arms and gun down kids, reportedly in black military fatigues. It's also not strictly, mostly, or always a gun control issue. See "Villager slashes 22 kids with knife at elementary school gates in China," a story also in today's news. Arming schools with massive security systems may not be the total solution either. Same goes for turning into a police state for our own protection. Malls, movie theaters, schools, fast food restaurants, places of employment -- shooters have struck all these places.

Instead of one on one confrontations, mentally ill individuals can take out a number of people at one time. They've used chemicals (See Sarin), biological agents (See Anthrax), poisoning (see the Tylenol Poisonings), guns, knives, bombs and who knows what else. That's what we're dealing with in the modern world. The mentally ill can attack many at a time now.

Obviously, we need to tend to gun control, security and other issues but we also need to start thinking more about what is preventative in a cradle to grave way...in a societal way...in ways that can't be entirely or mostly legislated or policed into being. Logic, emotional intelligence, imagination, our understanding of power, our understanding of love and reciprocal ethics...what is preventative in a way that can drop abuse rates of all kinds in modern societies? What is more on the damage control end of things and what is more preventative, often years earlier in life? We need to keep asking these and other questions. Gun control and beefed up security systems everywhere are on the damage control end of things. How do societies and/or individuals get so violent?

* Imagination's Role in Choices of Power and Equality (Goes into power wheels and power paradigms)
* Words and Concepts Build Power Paradigms Abusive or Egalitarian (We need to examine our words and watch our concepts because we are and power paradigms a collage of words, feelings, concepts, actions...)
* Reciprocity (What the Golden Rule has to do with equality and nonviolence)
* Love is... (What the different forms of love have to do with reciprocity)
* Autism as Wrong, Disease, Demonic or School Shooter for that matter (Because they're now pointing out that the Sandy Hook School Shooter, Adam Lanza, had a form of autism. A.S. ≠ Antisocial/Criminal)
* Autism Awareness and Egalitarianism -- What's in it for me?
* School or Mass Shooters (Ties into issues regarding power paradigms, makes the point that these shooters don't just snap one day. Their ugly finale was planned usually, daydreamed about...)
* Terrorism is a Tactic (Ties into issues regarding the power paradigms)
* Moral Panics and Witch Hunts (They create damages that can potentially take lives, devastate lives, and wound communities)
* Learned Empowerment (Imagination, power, "chunking" -- breaking things down into manageable steps/problems/solutions, and paradigm shifts)
* What's Our Greatest Resource? (Imagination, functional virtues, emotional intelligence, logic, and critical thinking ... informed solutions and informed paradigm shifts start with us. We are our greatest resource.)
* The Uncomfortable Topic of Fundamentalism and Behavioral Profiling (Puts an emphasis on things behavioral and emotional intelligences)
* Domestic Abuse and the Power Wheels
* Emotional Violence and the Culture War (Takes the idea of emotional violence to the cultural level because the 'drink we swim in' matters)
* Creedism Isn't a Word (Creedism, power, and reciprocity...equality)
* Community, Abuse, Shock, and Protecting Children (One look at the problem...)
* Cultural Slow Movements (One look at paradigm shifts and cultural solutions)

What the heck was that all about? How much do we really understand about our choices in logic, cultural answers, paradigm shifts, mental health and power (see the Power and Control and Equality power wheels)? What are our paradigms (world views), spoken and unspoken? How do we treat our neighbor (reciprocity, reciprocal ethics)? What do we understand about emotional and social intelligence, really? In ways that makes a difference in our world? What cultural paradigm shifts could also help drop abuse rates of all kinds and hopefully prevent more incidents like today's? What's our ramp of improvement, as it were?

I can't undo the violence of today's mass murderers, but maybe something can be done. Then maybe kids, parents, friends and loves don't have to die in incidents like this so often. We'll probably never stop all violence and suffering in the world but I bet there is a lot more we can do. We can learn and teach how to better be and think well.

It won't all come in a magic silver bullet approach. It won't come all from marrying the mental health industry to the pharmaceutical industry either (no, I'm not anti-medication). Or gun control. Or school, work, mall, theater, air port or other security. We have to better understand our choices of thought, power, emotion and logic. And our mental health options.

We are our best resource sometimes. We have to use the information we have and think in novel, applicable ways. That's what paradigm shifting for the better is about. We're in for a very long, involved, informed cultural paradigm shift.

I may add additional portions to my answers here so that I may hyperlink to credible, applicable sites that support, expound upon or add to the discussion. Many comment sections, CNN's for example, don't presently seem to allow comments containing links to be published (they may get lost in "Your comment is waiting for moderation" land never to be seen).

kyew (on CNN comments) asks, "Is this some blog where you can control all of the comments and make it appear to be "informed" and decidedly leaning toward your political views?"

People from different world views (cultural, religious, political, ideological...) can show an interest in decreasing abuse rates and violence. They can accomplish that. That's what my blog entry is about.

Tip: To totally discount others not by the directional force of their purpose, decreasing abuse and violence, but by their political or other identity involves logic or thinking errors. See "15 Common Cognitive Distortions," "The Top 10 Types of 'Stinkin' Thinkin'" or False Dilemma logic errors. Also see "Individual/Pack Behavior" (video!) by Jaron Lanier.

My oldest and my youngest will present me with a grandchild each this year and the babes should be about 2 and a half months apart. My oldest is having a girl, we already know, and will graduate college right around the time the baby is due. My youngest will be in college and I'll babysit the youngest's baby full-time. That kid will see me paint and make Art Dolls on a frequent basis.

It'll be the first time I enlarged a drawing with a grid and all. By hand. Yipes. I (somewhat) followed a tutorial from one of Linda Ravenscroft books. Her tutorial says to use watercolors from a certain point forward, but I used fluid acrylics instead. They can be layered much like watercolors due to their (varying) transparency.

I'd been diddling about trying colors, a few color mixes, reading about paints, but never got around to doing a painting because, well, I simply didn't have a clue how. I couldn't find a watercolor/watermedia artist to take lessons from locally, so tutorials in books is how it's going to be.

At least for now.

I did add a few more touches after this photo, like adding orange to the leaves to make them look more autumny but I'm too tired to take another photo. I'm just kind of excited that I can paint this well.

I show more of each step along the way on my xanga blog.

Joann stores are carrying this new product called chalkboard cardstock. It feels kind of sandpapery, similar to Ampersand's pastelbord. So I had to try it out. Keep in mind that I've only doodled in pastels a few times. But this attempt did answer my question rather well. Yes, it's texture makes it good to work pastels on (with your fingers anyway).

Costs less than canvas paper for painting purposes. It doesn't hurt that I got a gallon bucket of quality gesso for 14 bucks. Used a coupon for that too.

A Sketch of meine Großmutter/Vanaema...my mother's mother, whom we called "Omi" (affectionate term for grandmother in German). I tried lines/crosshatching and then blending with a soft synthetic brush (need to put up all my studio lights...they're still in boxes). Aux Quatre Crayons (Conté Sketching Pencils in four colors: sanguine, sepia, black charcoal and white). Plus a teeny tiny amount of Cretacolor Sanguine Powder.

I could have made some areas much deeper in color...and, I really have to learn not to smudge, and to check things like if pupils are symetrical, even. But not too bad. Now I should, like, actually follow some instructions in one of the books I have? Lol.

Copyrighted by Karen A. Scofield, 2011. sari 000 9 @ yahoo . com (take out the spaces and you have a usable email address). All rights reserved.

Just a quick sketch, to see what's possible with what I have.

80 something Aquistik colors and about 14 Golden Fluid Acrylic colors make Karen a very happy artist! Throw in some pencils, markers and pens and I'm, I'm, I'm...I'm going back to my Study-Studio Room!

I've done most of the ordering, everything but the shelves are in place, and I've started to practice. I've never done this before. I'm not a painter. I don't know what I'm doing. So I got Stephanie Pui-Mun Law's Watercolor book to help.